Airidh – THE REASON IT ALL BEGAN

Airidh (pronounced ‘Arry’) joined our family here at ‘Westie ReHoming’ at the age of four, when he was destined for destruction by another charity. Airidh and too many like him are our ‘raison d être’ and this lovely lad more than justified our faith in him over the next eight years, proving to be a loyal, loving companion with a wonderful zest for life and a wicked sense of humour. He enjoyed real quality of life until he left us suddenly and all too prematurely. 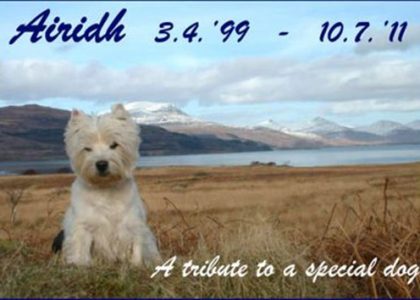 Westie ReHoming is a charity dedicated to the love and care of West Highland White Terriers that are in need of help or rehoming. Started by Jacqui and Robert Ferris-Woods Westie Rehoming has built a loyal following of supporters and volunteers, who believe passionately that before a Westie is deemed to be beyond rehabilitation, all possible avenues and remedies should be explored.

Between them Jacqui and Robert have considerable experience of charitable animal husbandry and welfare with both dogs and horses, with five Westies and a Scottie of their own and an extended family of long term rehabilitations, they are totally dedicated to the care and rehoming of West Highland White Terriers.

Their qualified understanding of canine behaviour and management brings the necessary professionalism to their passion and is a very important asset. Having carried out extensive studies covering stress in dogs, how it affects their physical and physiological health and integration into new environments, they are well placed to make detailed and conscientious decisions about responsible future homes.

Jacqui has owned westies for all her adult life having successfully shown and bred Westies before devoting her time to rescue as well as being active in a wide range of canine activities. She holds a diploma with Distinction in Pet Bereavement Counselling, has a professional qualification in Animal Communication, and an advanced certificate in Rescue.

Jacqui, Robert and their previous ‘family’ of Westies on the Isle of Mull 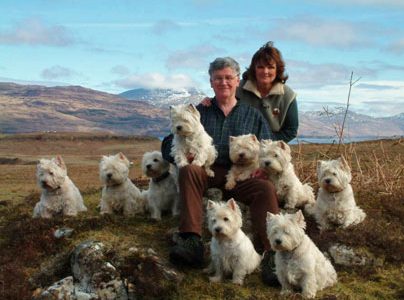 Sadly, Westies are received into ‘rescue’ for a variety of reasons, ranging from bereavement, the dog not liking a new baby or a marriage break-up to owners becoming unable to care for the dog or simply having a change in circumstances. The need to work longer hours is perhaps the most common reason in the current economic uncertainty for giving up a dog. Unfortunately the list of reasons is extensive.

When a Westie finds its way into our lives there may be emotional and stress related issues, so it is essential that they are assessed and given appropriate care. We use many complementary therapies together with natural supplements and we combine that with allopathic medicine when necessary and a high quality natural diet to promote good health. We encourage anyone accepted for rehoming to continue with this management regime

Anyone looking to adopt from Westie ReHoming will be subject to a home check to ascertain their suitability for a particular dog.  The homecheck will be done by one of our friendly, trusted and experienced volunteers.

It is important to note that we do not have a holding centre of dogs for potential adopters to choose from! Our priority is to focus on the best interests of the westies in our care and this may not coincide with the wishes of those who would like to adopt a Westie.

Our principal aim is to ensure that the westies coming to us are found permanent homes in order to avoid, as best as possible, future trauma and disruption. In some of the more extreme cases westies coming into our care have suffered from neglect and/or ill-treatment, these westies require extreme patience, understanding and special care to re-build their trust in interaction with humans. It is very important to consider carefully whether you as an individual or family are able to give such a dog the long-term patience, care and attention they will need in order to regain their confidence.

Where dogs come in together as a pair, we will ensure that they stay together and are not split. The  person adopting the dogs will need to sign to the fact  that if one of the dogs proves to be unsuitable for its new home, they must both be returned to us together.

Anyone chosen by Westie ReHoming to adopt one of our rescued Westies, does so on the clear understanding  that should they become unable to care for the Westie at any stage, we must be informed as soon as possible and allowed to make the final decision concerning the dog’s future.

As a registered charity we require an adoption donation to help towards the cost of running Westie ReHoming.

For those who are relinquishing dogs we ask that you inform us if you make other arrangements for the dog(s) you were giving into our care, or if adopting that you tell us if you have obtained a dog from another source. Westie ReHoming relies on the hard work of its volunteers all over the country and we do not wish to waste anyone’s time and efforts through a simple lack of communication. 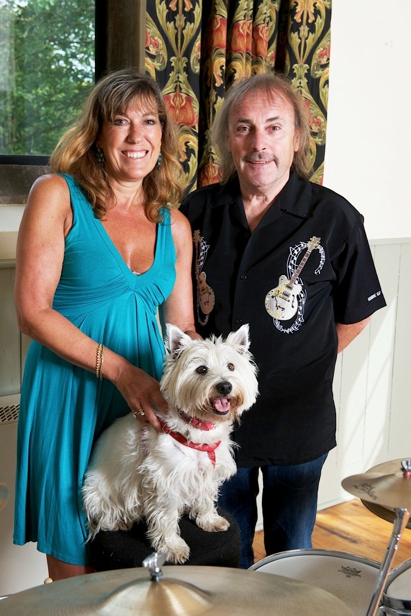 We are very proud that John and Gillie have been our patrons and most ardent supporters since 2007 never missing an opportunity to promote Westie ReHoming. John was an original member of a band with many names including ‘Traffic Jam’ but the group eventually settled on a name and became none other than the legends of Rock ‘Status Quo’, with John playing on drums with the group from 1962 – 1981.

After leaving ‘Quo’ John collaborated with several other Rock N Roll stars of the era producing great music, all whilst forming and performing with his own band aptly named ‘John Coghlan’s Quo’. His band has toured successfully across the UK and Europe playing well known Quo standards amongst many other great songs.

They have had westies for many years, the most recent ones from Westie ReHoming, and are always keen to ‘fly the flag’ for the charity.

Some of our lovely volunteers 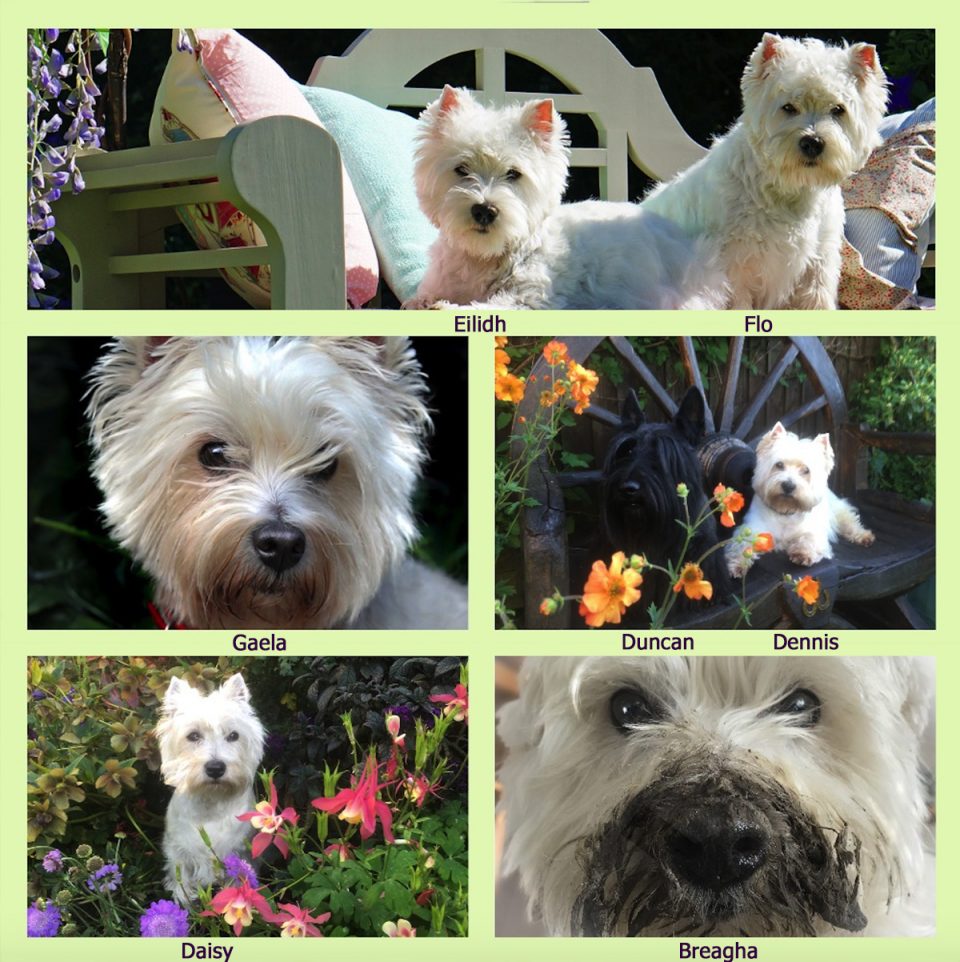 (we are proud to say that all our current ‘workforce’ are rescues!)