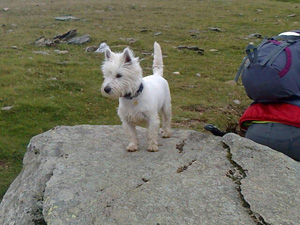 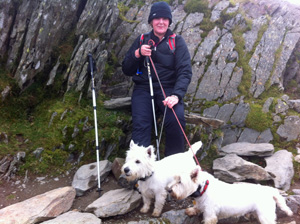 We have heard from Colin and Mary, who adopted Magnus and Jack from us. They are just back from climbing Snowdon with the dogs, having already completed the Three Peaks with Magnus.
Very well done boys, we bet you enjoyed it, you lucky little chaps. The photos were taken on the way to the top and at the summit.

This is what Colin and Mary wrote:

“We were very fortunate to re-home Magnus in 2010 and Jack in 2012 having been told by numerous friends that they are “lovely little dogs that need very little exercise”, they were right about the lovely but not the exercise. Fitting in with our desire to spend time outdoors Magnus has now completed the Three Peaks including Ben Nevis in Apr 12 in falling snow and visibility in inches. Jack has now completed his first of the Three Peaks, Snowdon in Aug 13, but will go on to do the remaining two and no doubt they will both do many more other peaks. They are a fantastic pair of Westies with all the energetic and inquisitive traits of the breed, they have fitted in perfectly to our outdoor life style and get so excited when they see walking boots coming out of the cupboard.”