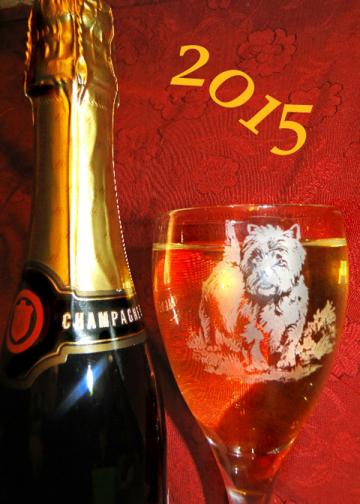 2014 was a notable year for the charity,in which we celebrated our tenth anniversary. The occasion was celebrated by volunteers and supporters at an excellent Garden Party at Westie ReHoming HQ, entertained by a super band ‘Roadhogs’.

The year was a very busy one, with the launch of a new website, various educational events and seminars, and working on a couple of exciting projects to be announced in 2015. Other educational events are being planned for 2015, not least of which is hoped to be a return seminar with highly popular top dog law solicitor Trevor Cooper.

We lost some valuable volunteers in 2014 to health problems, and saw the very sad passing of two very special people. However, we have recruited some lovely new people and look forward to working with them in 2015. We recently appointed a new trustee, the multi talented Anna who will be an asset to the charity.

Our little charity westie Eilidh became the cover girl for the Kennel Club 2015 calendar and we were invited by the KC to attend Discover Dogs to help promote the calendar. Earlier in the year some volunteers and rehomed westies attended Crufts, promoting the charity on a stand courtesy of Eukanuba and Kennel Club Breed Rescue.

We received an unprecedented number of enquiries and requests for help in 2014 which must reflect the growing crisis in rehoming. We had more requests too for advice and pet bereavement counselling. This time of year is even more poignant for anyone who has lost a pet or had to rehome one, and we feel for them deeply.

Our hope for 2015 is that people will think more carefully before choosing their family pet. Our experience over the Christmas season has shown that we still have a long way to go, despite the negative publicity surrounding puppy farming. In an ideal world we wouldn’t need to exist, but the reality is very different.

Here’s wishing you a happy, healthy, peaceful new year from all at Westie ReHoming.

(By the way, we still have some Kennel Club Breed Rescue calendars for sale at £5 featuring our little superstar. If you’d like one please call or email us)

15th of March, 2014 – Raising Awareness and Calling for Tougher Penalties for Pet Thieves This is our chance to highlight to a wider audience the misery that thieves are causing by stealing pets and horses. We have three main aims: Prevention, guidance to victims, and to campaign for tougher laws. If you own a…

We are delighted to have been invited by the Kennel Club to be one of four breed rescues to have a presence on Sunday November 10th at Discover Dogs, Earls Court London. We will be on hand to answer your questions about adopting one of the westies that come to us. Polly and Jess and…

15th of February, 2015 – Four cracking rehomed westies to fly the charity flag By courtesy of the Kennel Club and Eukanuba we are off to Crufts once again, Are you going to CRUFTS on Terrier Day, Saturday March 7th? If so please come along to say “Hello” and meet some of our volunteers and…

7th of May, 2016 – Some tips to keep your dog cool Most people are loving the warmer temperatures after the dire winter weather, but spare a thought for your dog who may be struggling to keep cool. Shaving your westies will make it worse as their skin will then be exposed to UV rays…

Whilst in the Scottish Borders recently we happened upon a notice “ROLLICKING RESCUES and BAD ASSES” – we were intrigued! Further investigation gave notice of an Open Day at the Scottish Borders Donkey Sanctuary at St. Boswells and we decided to go along to discover what kind of problems may be encountered in their rehabilitation….