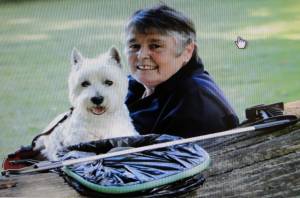 (Courtesy of the Sunday Telegraph)
A Sunday Telegraph reader, Paul Penfold, has nominated Pat English and her beautiful westie HUWI, from Westie ReHoming. “We live opposite the beautiful Hughenden Park on the outskirts of High Wycombe,” writes Mr Penfold. “For the past 14 years, Pat has tirelessly devoted herself to the task of keeping this park tidy for the benefit of those who use it”

Ms English, 65, accompanied by her West Highland terrier, Huwi, can be found every day in the park. “The council don’t go into the park and collect litter, they just empty the bins,” she says. “The rubbish I find is mainly bottles and paper – we get a lot of young people here having parties and drinking.”

Her direct action approach doesn’t stop with collecting, though. “I once found a bag of rubbish containing an envelope with an address from the North. I wrote to them, saying if they were going to visit the park, they should take their rubbish with them. I didn’t hear back,” she says.

Hughenden Park is spectacular: 25 hectares of parkland leading to Hughenden Manor, once the home of Benjamin Disraeli. Not that the sweeping vistas stop visitors from littering. “My bugbear right now is wipes,” Ms English says. “People use them on their kids and then throw them away, often yards from a bin. You find them in hedges and in trees – and they’re not biodegradable.”

“People have got to get involved with their local area and care about their local environment.

“Everyone wants to live in a nice place. To do that we must start taking responsibility for where we live.”

Love Where You Live is an anti-litter campaign, led by Keep Britain Tidy. To get involved, visit www.lovewhereyoulive.org

6th of July, 2014 – Westies enjoy walk in Royal park Cambridgeshire volunteer Janice organised a reunion westie walk and picnic in the beautiful grounds of Sandringham Estate recently as part of Westie ReHoming 10th Anniversary celebrations. Nineteen westies and their proud owners enjoyed the day which it is now hoped will become an annual…

Two WRH boys set out to prove that westies love an active outdoor life. We have heard from Colin and Mary, who adopted Magnus and Jack from us. They are just back from climbing Snowdon with the dogs, having already completed the Three Peaks with Magnus.Very well done boys, we bet you enjoyed it, you…

Ozzie, a 3 year old ‘Workie’ adopted by Mrs. Fletcher from Westie ReHoming has quite literally come on in leaps and bounds. Once a rather wilful, mischievous little chap he now channels his energies into Obedience and Agility training. Ozzie attends Raleigh Dog Training Club in Swindon where he has now made it into the…

‘E’ is for ADDITIVES – You are what you eat We are sufficiently concerned at the problems with a large percentage of the dogs that we deal with that can be linked to a certain type of pet food that we have been prompted to write this page. One particular brand alone appears to be…

20th of August, 2015 – Meet the WRH stand and new Doggie Delights Deli Summer returns briefly to the south of the country on Saturday and promises to be at the popular Wanborough Show and Carnival in Wiltshire. The show always attracts a large crowd and has plenty for everyone, including a horse show and…